Endings and Beginnings – A Ritual of Initiation 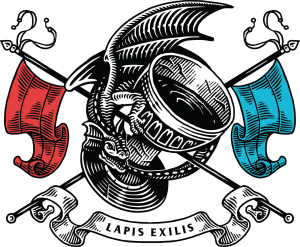 The first question Initiation teaches a person to consider is “where does one thing end and another begin?”

We often hear how, “all things are One.” But while that’s true at the very highest level, it’s the kind of truth that must be kept distinct from the more practical affairs of life. Confusion over distinct lines of demarcation (promoted by popular culture) has forced many well-intending people to live in the absence of any real, rooted conviction.

The personal danger posed by the cultural sanctioning of such blurred lines, vague definitions and formless inner-landscapes is that, with no guiding stars by which to navigate a person is merely drifting, living without direction, disconnected from ports of future opportunity, robbed by pirates of the goals that would otherwise give their life meaning. In the same way, Kingdoms need written constitutions and clear boundaries, otherwise they become difficult to regulate, and impossible to rule.

This is the also true of consciousness.

If “Reason’s Sword” has a dull blade, logic quickly degenerates. If all things are One, then all things are equal, the same. If so, why make much effort to notice the difference between justice and injustice? If sickness is equal to health, and victory is the same as defeat, then what difference really exist between today and tomorrow?

This lack of a “firm assertion” is at the root of psychological impotence. Without a visible horizon, the marker of progress becomes obscured, humor turns ironic and we no longer know if we’re going forward or backward, if we are really living or dying.

This epic form of confusion- the brand of post-modern consciousness, must become our sacrificial victim, slain upon the altar of True Will at the moment of initiation. It is through its blood we must tread as we pass through the threshold of “The Pylon.”

The threshold represents the exact moment, the exact point, where change can be tallied, where a difference can be discerned.

Initiation is the turning point where what was, is now becoming what will be.

Endings and Beginnings mark distinct phases, seasons, passages, and graduations that make up a broad sequence of events whose overall journey leads to wholeness.

The initiatory importance of recognizing stages, phases, and chapters of initiation is to develop the skill of “intelligent discernment.” Once mastered, this skill will become your friend and ally, urging you onward as you triumphantly march renewed through the gates of succession.

Power is made available when we connect these two as a simultaneous action.

When we are brave enough to properly understand: life leads into death, just as death leads back into life – every ending becomes an opportunity for renewal.

The “Sacrificial Upgrade” is the transformative potential (energy) that lay in things “better-to-be-discarded.” Not only are those out-of-date habits a heavy burden to carry, but their energy can be recycled (sacrificed) in order to retrieve the life they’ve been consuming.

Freed from the tax of their unneeded presence, the Initiate now experiences a surge of reclaimed life for the purpose of nourishing the growth of their new creations.

Effectively ending out-of-date habits, routines, personality traits, memories, and styles of behavior, is like having a garage sale of knick-knacks that were previously cluttering up a person’s house.

During the Sacrificial Upgrade, we liquidate what we no longer want or need, liberating its energy and using that energy to vitalize and renew our consciousness during the upcoming transitional phases.

In this way, a person learns to effectively transform those stagnate forms associated with “endings” into the kind of fresh, new energy synonymous with successful “beginnings.”

One of the greatest inhibitors of forward progress are the remains of things left undone from previous phases.

Without a proper and decisive completion, be it a phase, a relationship, or a pattern of behavior, the mind’s unconscious processes continue paying dividends of mental energy out to phantom impulses – reoccurring fees on unwanted subscriptions.

Once a person is clear on their “sacrificial content” and committed to the stated purpose of their Endings and Beginnings Ritual, they proceed to demonstrate that intent ceremoniously. This clarifies any doubt about what’s happening, or when. (Stated purpose, specific time, specific place)

Make a deliberate, symbolic demonstration of what you’re bringing to an End, while conversely keeping in mind where this released energy will be funneled. To the beginning of what new life is this sacrifice dedicated?

Like life itself, there is no end without a new beginning. Life plugs the first into the last, the old into the new.

Having a new place for the sacrificed current to travel is the key to successful initiation of Endings and Beginnings.

Acquiring the power of beginnings and endings is the first step on the Royal Road.

The end of what no longer is…is the the beginning of what’s to come. Initiation.

What decaying forms will you sacrifice to bring a new vision to life?

“Every act of creation is, first of all, an act of destruction.” -Pablo Picasso